The all-new BeamLab 1.5 is here! This release contains some exciting new features as well as performance and stability improvements. Read on to learn what’s new or directly jump to the release notes.

Part of the BeamLab software is based on the Beam Propagation Method (BPM) which is typically used to evaluate the evolution of optical fields in free space and waveguides with rather simple input field distributions similar to those of Hermite- or Laguerre-Gaussian beams. However, in combination with complex images (e.g., the face of a wolf as shown in the example below) as input distribution, it can also be used to analyze a wide range of imaging systems incorporating lenses, apertures, optical elements that correct for aberrations or diffract the beam, and many more. BeamLab calculates the exact field distribution at any arbitrary plane between the object and image plane, and thus provides you with some unique and in-depth insights on how the imaging system works and how to optimize it.

In this respect, BeamLab 1.5 contains a couple of new features which make it very easy for you to simulate such imaging systems. For creating an input field distribution from an image file, we have added the function imageinput. It supports scaling, shifting, rotating, flipping (left-right or up-down), and inverting the image via the optional parameters Width, Shift, Rotation, FlipLeftRight, FlipUpDown, and Inverse, respectively. For example, the image wolf.png can be imported and rotated by 180° via the following simple command:

By using images as input field distributions you will be able to simulate imaging systems such as the following 4f optical system which consists of two lenses with identical focal lengths f  located at z = f and z = 3f:

Next, let’s assume you wish to add an aperture in the Fourier plane (2f-plane) of the 4f optical system to simulate an optical low-pass filter, i.e., a filter that blocks the higher spatial frequencies. In BeamLab 1.5, it is now easier than ever to display the aperture’s transmittance and the x-y intensity distribution (x-y intensity slice) directly behind the aperture by using the new optional parameters TransmittanceSlicesXY and SlicesXYSectionEnd, respectively: 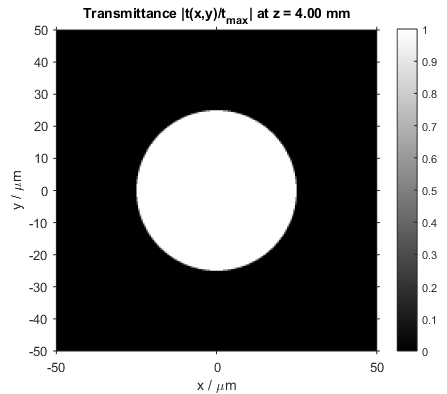 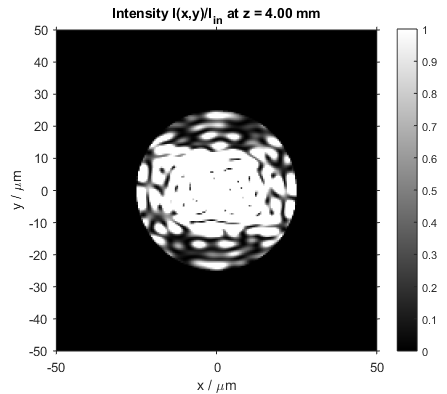 Starting with this release, you have now also more control over the amount and type of parameters that are returned in the output structure at the end of each simulation. Until the previous release, the distributions of intensity, each field component, and refractive index were always returned, resulting in a potential memory bottleneck for very large matrices, i.e., large values of gridPoints. The newly added parameter OutputParameters now allows you to work with larger matrices by reducing the output data to exactly those components that you need most. For example, if you are only interested in the intensity and the x-component of the electrical field of your simulation, you can now simply add the following line of code to your simulation file:

In combination with the powerful fasthomogeneous function introduced in BeamLab 1.3, this feature comes in handy if you wish to simulate, besides optical waveguides and micro-optics, also beam propagation through rather large-scale optical elements with lateral dimensions, e.g., in the centimeter range, that may require very large values of gridPoints.

For your convenience, the demo m-files that come bundled with BeamLab, are not optimized for speed but rather for making it as easy as possible for you to learn how to use BeamLab. We have added a new parameter called performanceMode at the begin of selected simulation files, which is a switch for optimizing the simulation performance. Its default value is false, but when set to true, the refractive index scan and field monitor functions will be turned off all together independent of the settings in the parameters IndexScanner, Index3D, and Monitor, resulting in a significantly reduced computation time.

For general tips on how to reduce the overall computation time of your BeamLab simulation, please refer to the simulation performance documentation page by executing the command beamlabdoc simulation_performance. If you want to optimize the performance of your scripts, do not hesitate to contact us — we are happy to help you with the implementation of your optical problem.

In this release, we have also added four new imaging demos. Among those is the imaging of a pure phase object through a 4f imaging system using the principle of phase contrast microscopy. By modulating the DC (zero) spatial frequency component in the Fourier plane at z = 2f with a quarter-wave phase plate, the inherently invisible phase distribution in the object plane can be converted to a visible intensity distribution in the image plane. The following two figures show the intensity and phase distributions in the object and image planes at z = 0 mm and z = 8 mm, respectively.

Intensity (left) and phase distribution (right) in the object plane

Intensity (left) and phase distribution (right) in the image plane