The all-new BeamLab 2.0 is here! This is the first major version in the history of BeamLab since our initial release 1.0 with some exciting new features such as:

Read on to learn what’s new or directly jump to the release notes.

Simulations based on the finite difference method require the calculation domain to be discretized and enclosed by a boundary. If one wishes to calculate for example the field distribution or propagation constant of a waveguide mode, the refractive index distribution of the waveguide’s cross-section needs to be defined on a finite grid and inserted into the wave equation together with boundary conditions that force any field components to zero at the location of the domain boundary. The accuracy of the simulation is thus determined by (a) how small the grid’s mesh size can be made in the area where the refractive index changes and most of the mode’s energy is concentrated, and (b) how well that area can be isolated from the domain boundaries to keep their influence on the result to a minimum. It is also clear that with a uniform grid spacing, a performance trade-off exists when trying to use as fine a grid as possible and at the same time push the boundaries as far out as possible.

To improve the accuracy of mode calculations without having to significantly sacrifice performance, we introduced in the Mode Solver Toolbox of this release the possibility to define a non-uniform grid which allows one to place a fine grid in the area of interest, i.e., where most energy of the mode is concentrated, and a coarse grid in the area that only serves as a buffer zone to keep the boundaries sufficiently far away.

For better illustration of the various possibilities on how to change the grid structure, the following example shows the calculation results of the fundamental mode of a rectangular waveguide with a size of 4 µm × 2 µm and an index difference of 0.05 between core and cladding based on three different grid types at a wavelength of 1.55 µm. 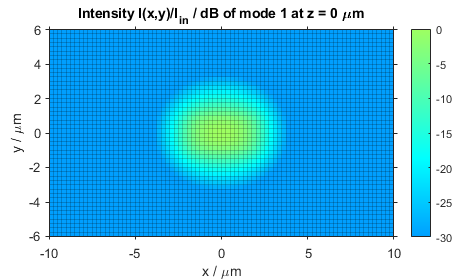 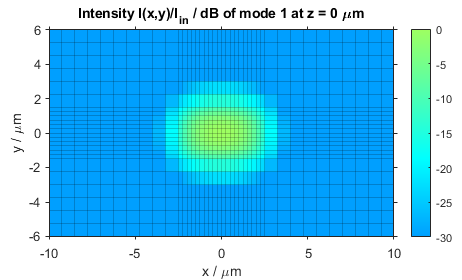 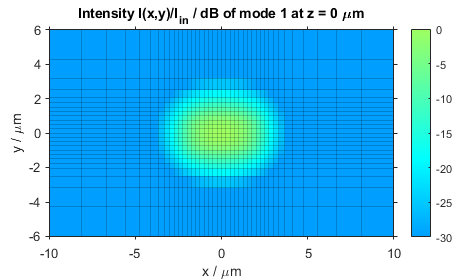 The first figure represents the case where the whole calculation domain (20 µm × 12 µm in size with a total of 80 × 48 = 3840 grid points defined by the parameter gridSize and gridPoints) is filled up with the standard uniform grid. In the remaining two figures the uniform grid is confined to an area of only 5 µm × 3 µm but the size of the calculation domain is still the same although with a largely reduced number of grid points of only 40 × 24 = 960 (defined now by the new parameters ExpandedGridSizeand ExpandedGridPoints) that are distributed across both the uniform and non-uniform grid. The change in mesh size inside the non-uniform grid is defined by a polynomial function whose order can be set by the parameter ExpandedGridOrder. A value of 0 corresponds to a constant mesh size, while a value of, e.g., 3 corresponds to an increase in mesh size according to a cubic function. In the latter case, the transition from uniform to non-uniform grid is much smoother, which further increases the calculation accuracy in the mode’s vicinity, while the mesh size rapidly increases towards to the domain boundaries. However, since the mode carries nearly no energy near the boundaries, the effect of the coarse grid on the calculation accuracy there is negligible.

For optical devices that consist of a large number of periodic elements such as photonic crystals (PhCs), it is sensible to take advantage of this periodicity and investigate only the modal properties of one characteristic element, i.e., the unit cell, of the periodic array. To do so, the boundary conditions play an important role as they have to make sure that not only the field from the boundary at the opposite side is properly reproduced but possibly can also have some arbitrary phase shift. Starting with this release, periodic boundary conditions can also be used in the Mode Solver Toolbox. The relevant parameters are BoundaryX and BoundaryY that need to be set to 'periodic', as well as BoundaryXPhase and BoundaryYPhase that can take on arbitrary values as phase shift between opposite boundaries.

The following example shows the calculation of the fundamental mode at the wavelength of 1.55 µm of a PhC that consists of air holes with a diameter of 8 µm arranged on a hexagonal lattice with a lattice constant of 10 µm in a medium with a refractive index of 1.5. The figure on the left shows the unit cell’s refractive index distribution and the one in the center displays the intensity distribution of the fundamental mode. For reference, we added to the right another intensity distribution that was obtained by expanding the area of the calculation domain by a factor of 9 (i.e., 3 times in x- and y-direction, respectively), again with the periodic boundary conditions applied only to the domain boundaries but resulting in exactly the same mode confirming that the much more performant calculation on the single unit cell accurately determines the fundamental mode. 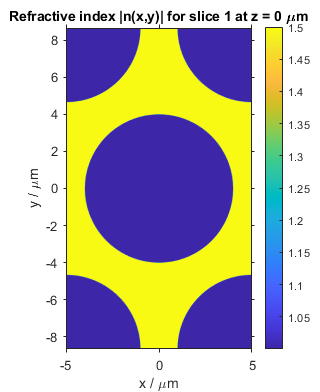 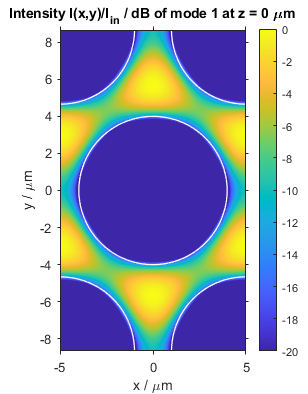 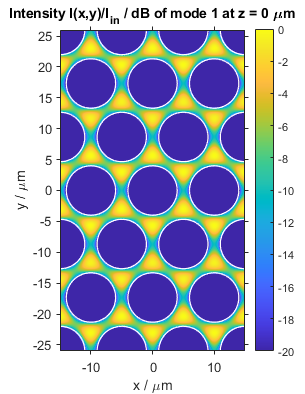 The following three videos show several examples of geometrical twist and rotating anisotropy in conjunction with an elliptical waveguide. The elliptical waveguide has a core with a width of 8 µm along the major and 4 µm along the minor axis. The index difference between the core and cladding is 0.5. Furthermore, twist is imposed by assuming that the core is rotated by 90 degrees over a distance of 1 mm, and index anisotropy is imposed by assuming that the waveguide consists of an uniaxial medium exhibiting a 1% higher refractive index along the extraordinary axis which is parallel to the x-axis at the input plane. The take-away conclusion of this simulation is that the perturbation induced by the core’s elliptical shape alone is usually not sufficient to entail a stable rotation of a linear input polarization in conjunction with (geometrical) twist.

In this release, we have also added a total of 12 new demos. One of these shows the focussing mechanism of a micro ball lens when a Gaussian beam with a beam waist of 40 µm propagates through the lens with a diameter of 90 µm. 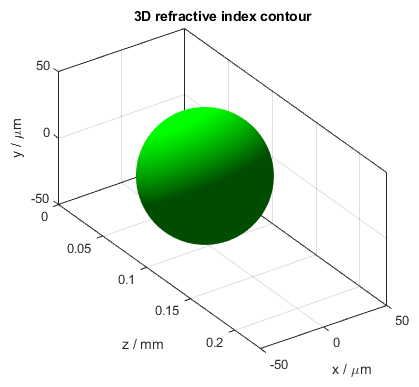 Another one shows how orthogonally polarized beams that initially do not interfere with each other suddenly change into interfering beams when passing through a polarizer located at the distance z = 0.35 mm. The polarizer is emulated by a thin element of zero thickness that completely removes the field’s x-component of the incoming beams.