Welcome to BeamLab 2.2! We are pleased to announce our latest release which is packed with exciting new features as well as performance and stability improvements. Read on to learn more about some of the highlights or directly jump to the release notes.

Creating a waveguide’s refractive index distribution via an image file

One of BeamLab’s strengths is a simple user-interface that does not require the user to learn how to use a proprietary CAD tool to set up the simulation model. As such, BeamLab comes with a large number of pre-defined waveguide functions to enable a quick and easy setup of basic waveguide structures such as tapers, splitters, couplers, etc. Although these functions and their combinations cover a wide range of applications, it is also clear that they could never fulfill the design needs with respect to all thinkable waveguide structures. To break through a potential design limitation based on pre-defined functions and thus provide our users with greater flexibility in designing and simulating the waveguides of their choice, we added this time a new waveguide function dubbed importedwaveguide that allows one to import and create waveguides based on a two-dimensional image representing the refractive index distribution of the waveguide’s cross-section in either the x-y, x-z, or y-z plane. In the following example, we show the refractive index contour and respective field propagation through a planar waveguide representing the input star coupler of an arrayed waveguide grating that was created by means of a black & white PNG image drawn with a third-party CAD software and imported into BeamLab. In this specific example the image represents the waveguide’s cross-section in the x-z plane. The waveguide’s thickness was separately defined by the optional parameter  Width of the function importedwaveguide to be 2 µm. 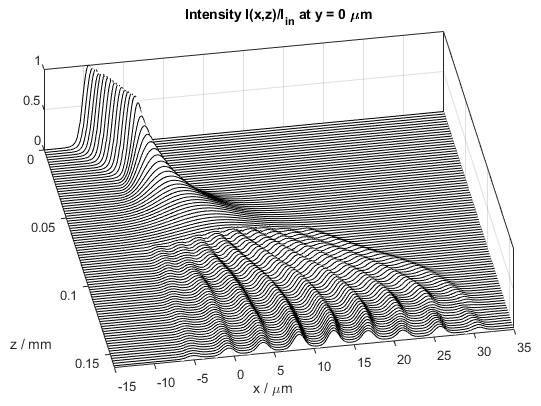 A simulation model in which the lateral extension of the propagation beam varies by a large factor, e.g., hundred or more, can be computationally very expensive as the resolution for the whole model needs to be set according to the smallest extension or feature. In this release we added a function dubbed resizefield that allows one to easily adjust the size and resolution of the output field of the previous calculation to the size and resolution of the next one and thus optimize calculation speed without sacrificing accuracy. In the following example, we illustrate this by focussing a collimated Gaussian input beam with a beam width of 1 mm into a waveguide core with a width of 5 µm by using a thin lens with a focal length of 2.5 mm. By splitting the simulation model into multiple sections, the grid size is gradually reduced from 2 mm to 60 µm and thus optimized to cover just the area where the beam’s field strength is mostly concentrated and significant enough to affect the propagation characteristics.

Algorithms based on the beam propagation method mostly focus on the calculation of the electric field. However, for an accurate evaluation of the power flow throughout the simulation model it is essential to have also knowledge on the real part of the Poynting vector which in turn requires also knowledge of the magnetic field. Starting with this release, BeamLab offers the possibility to calculate the electric and magnetic field simultaneously and thus provides a means for the accurate evaluation of the Poynting vector. If the parameter FieldType is set to 'EH', any intensity related calculation will be automatically based by default on the real part of the Poynting vector.

In this release we also expanded significantly our demo library. One of the new demos is dubbed nanf and gives an example on how to calculate the eigenmodes of a nested antiresonant nodeless hollow core fiber (NANF). Among the various types of photonic crystal fibers developed so far, NANFs have attracted considerable attention in recent years for their potential to achieve for the first time a lower propagation loss over a broader wavelength range than conventional solid core fibers. The following figures depict the NANF’s cross-sectional refractive index and fundamental mode’s intensity distribution, respectively. 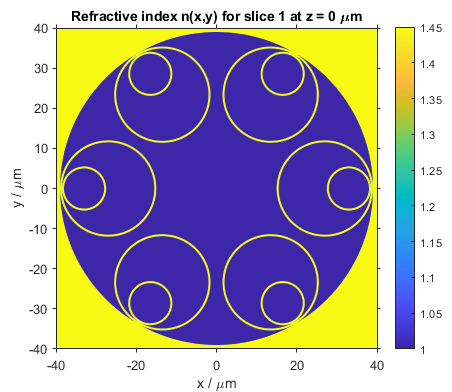 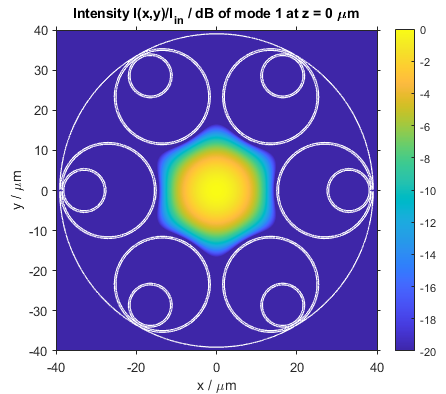 Another demo dubbed metal_slit illustrates how BeamLab works with media that exhibit a complex refractive index such as metals. In this demo a metal slit made from Aluminium is illuminated with a Gaussian beam in width twice that of the slit. The following figures show the intensity distribution in the x-z plane for the cases where the input beam exhibits y (or TE) polarization and x (or TM) polarization, respectively.

Finally, a third demo that we would like to introduce here is the demo dubbed ronchi_grating_thick which depicts the field changes in close vicinity of a “thick” (in contrast to thin elements of zero thickness) Ronchi grating. The refractive index of the substrate is 1.5 and the grating’s groove depth is chosen to generate a phase delay of π . The following figure shows the field distribution of the electric field’s real part in the x-z plane. At the grating’s output plane the beam’s phase alternates between 0 and π . The generation of such thick gratings whose thickness, surface profile and refractive index of the unit cell can be freely defined by the user is now enabled by the new function grating.